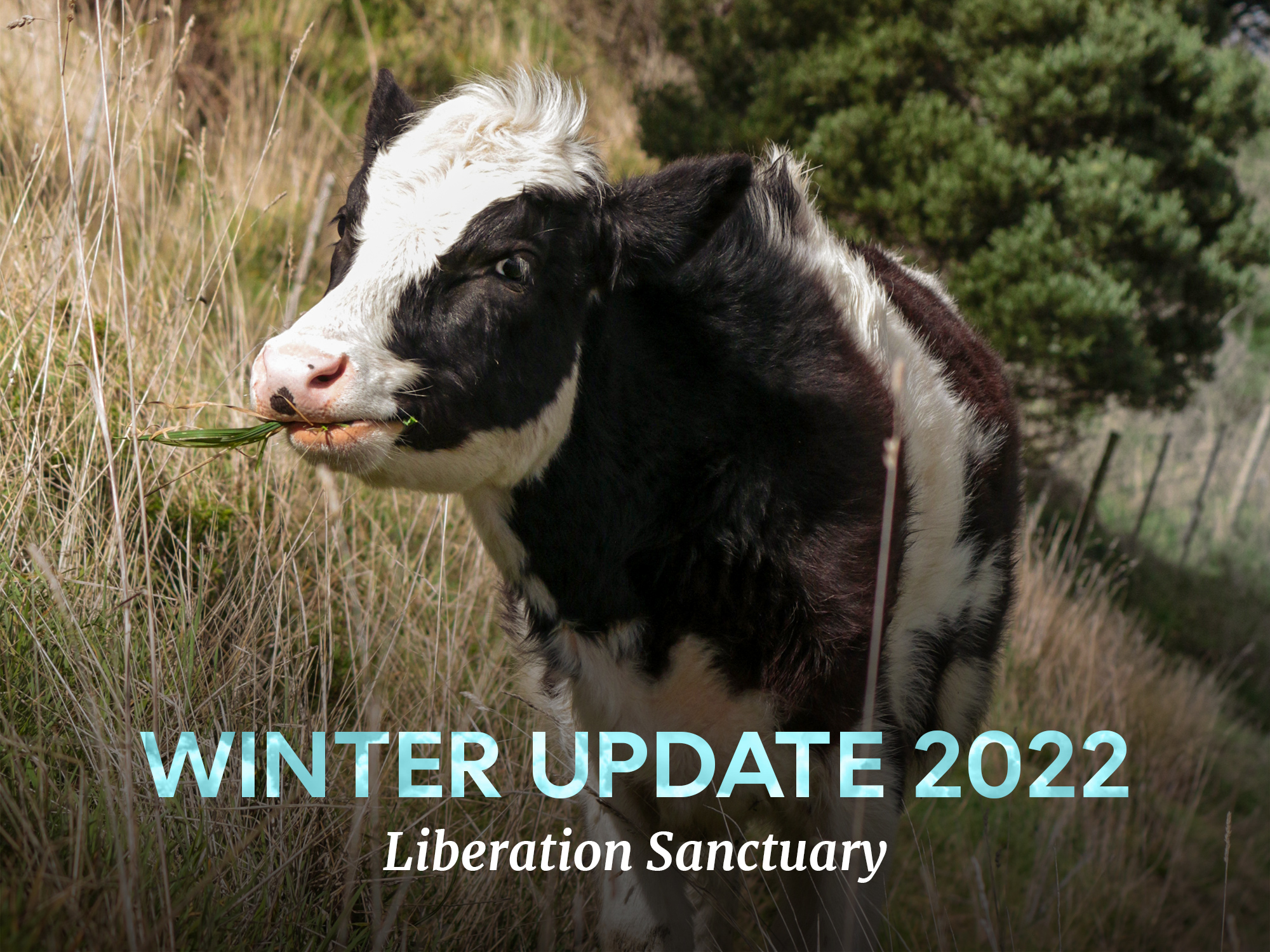 This update is brought to you by Patty Mark, founder and manager of Liberation Sanctuary.

It was indeed liberating to transition from our approximately quarter acre urban Sanctuary (circa 1986) in Elwood to a beautiful and spacious 45 acre property with spectacular views in the country. And this meant we could take in more animals, give them room to roam and not worry about the local Council objecting to pigs, roosters, calves and sheep in Elwood.

The move came with a sharp learning curve, but with the help of some devoted volunteers and staff we settled in. And we believe the 95 – 100 animals, who at any one time, make this their home enjoy their life almost as much as we enjoy seeing them experience freedom.

And the BEST part is knowing none of them will ever, ever go to a slaughterhouse! Knowing this makes every ounce of hard work worth it.

Let’s consider…. the slaughterhouse – the largest and most ferocious violence on our planet, always there yet never ‘seen’. Back in 1981 when ALV was just over two years old I used to spend hours in the Melbourne Department of Agriculture’s reference library after I dropped the kids off at school.

There was no such thing as the internet or google search back then.  I wanted to learn as much as I could about animal agriculture from the inside, so I knew the questions to ask and the bottom line of this rapacious and cruel industry.

I was distressed to read in a Livestock Journal about a study concerning ‘dark cutting’ and what it was costing the industry in profits. I had never heard about this before, but it was a huge concern to the animal agriculture industry as it cut deeply into their profits. It hasn’t changed over the years and the NSW Government currently describes it in 2019:

“A dark cutter is a carcass of beef that has been subjected to undue stress before slaughter, and is dark in color. Sometimes referred to as dark cutting beef, they have a dark color which makes the meat appear less fresh, making them undesirable to consumers. Darkcutters fetch a lower price than otherwise ordinary beef on the market”

I quickly learned that one of the main causes of slaughtered animals producing darkened flesh instead of bright red was stress. It saddened me to comprehend, yes, how distressing and terrifying it would be for animals facing the kill line. The absolute fear of what was going to happen as well as the stress of transport, no food, mixing with strangers etc.

This being something I knew absolutely nothing about or had even thought about in my then 33 years.  I then decided to ask the Department of Agriculture to take me to some slaughterhouses so I could further investigate this chilling fact.  If it were true and we had eye witness evidence of the inherent fear and stress the animals suffered it would open public eyes to the harm and terror that is the sole essence of these killing centers.

The Department of Agriculture obliged my request by organising visits to five Melbourne abattoirs that winter. From then, my life changed dramatically. I won’t digress here to describe the trauma I saw before my eyes that will never leave me, suffice to say I promised those animals whose brutal slayings I witnessed, while taking notes on a clipboard, that I would spend the rest of my life working to shut down slaughterhouses.

So fast forward to here at Liberation Sanctuary, whereas the numbers of animals spared this brutal injustice is minuscule, to each and every one of them it’s their whole world.  And because each animal here is so respected and considered family nothing could be more important.

Animal Liberation Victoria started taking in rescued battery hens and broiler chickens in the 80’s at our urban sanctuary in Elwood.  Countless animals knew refuge, care, medical attention and love there over the years until we moved to Gippsland in 2016.  Our urban sanctuary generally had up to 35 animals in care mostly hens, ducks, geese and turkeys) while the rescued piglets, calves, kids and lambs had to be rehomed in the country after weaning. Currently we are caring for 95 animals who are respected, loved and acknowledged as the incredible individuals each one is.

Winter 2022 here at the sanctuary has turned out to be incredibly hard and busy! The rain hardly ever stopped, yet our power and running water to the house did numerous times.

Living rural means you’re not on town water connection but must rely on rain water tanks installed on your property. Our main tank started a slow leak that we didn’t notice until it gradually escalated and after six years here I had to start buying water delivered in a tanker truck, over $2,000 worth in four months! 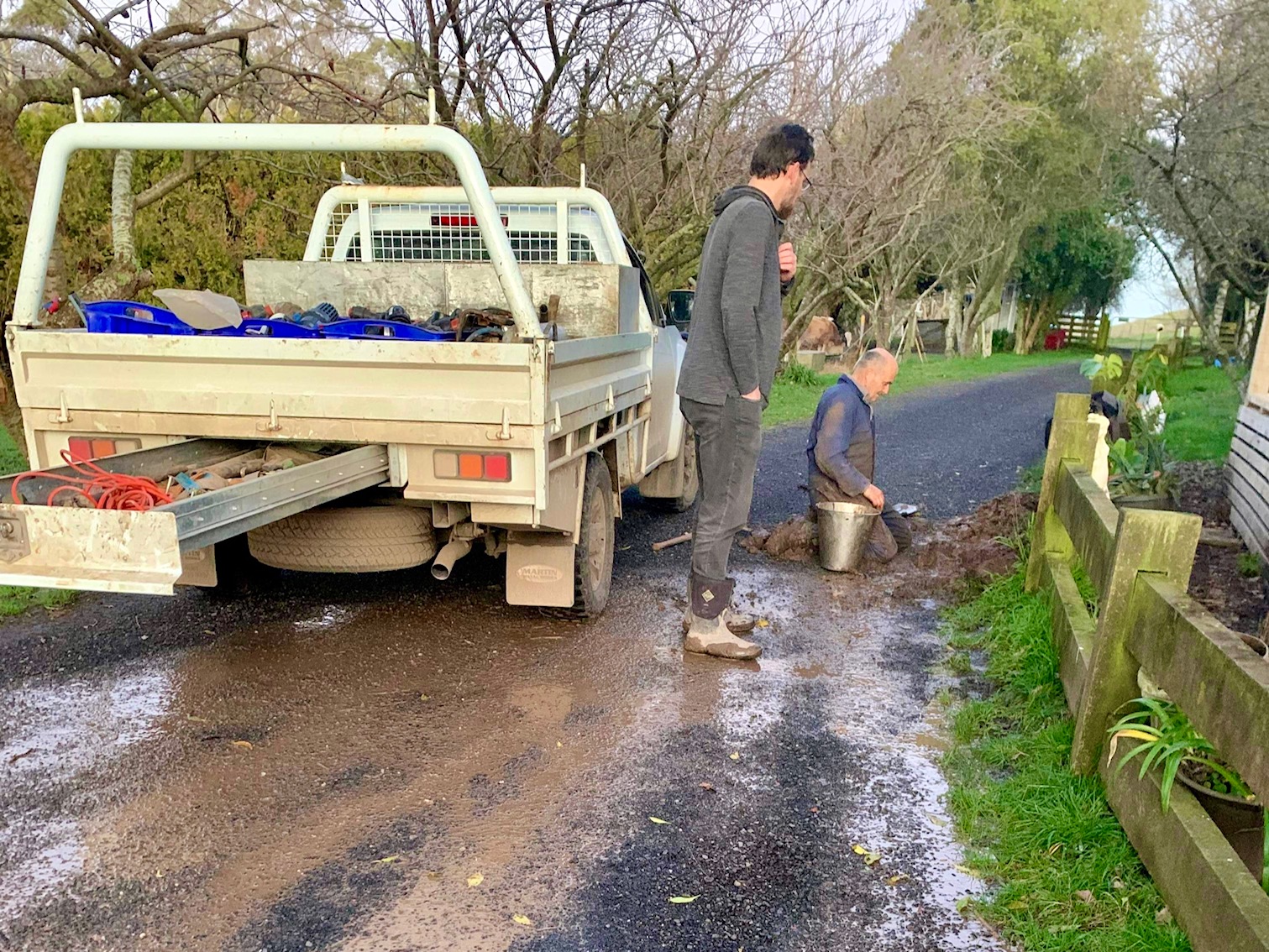 Several of us dug and searched unsuccessfully for the leak. My trusty pump/tank man had all but given up when several hours later after he packed up to leave bubbles started to emerge in the least likely place and presto the nasty leak (with the help of torches) was fixed!

So even though with the continual rains there was water, water everywhere we had no running water to the house for over a week.  Thankfully everything is good now and the main water tank is already over half full with all the recent rains.  City folk have no appreciation of how precious running water is, I know I never realised this! 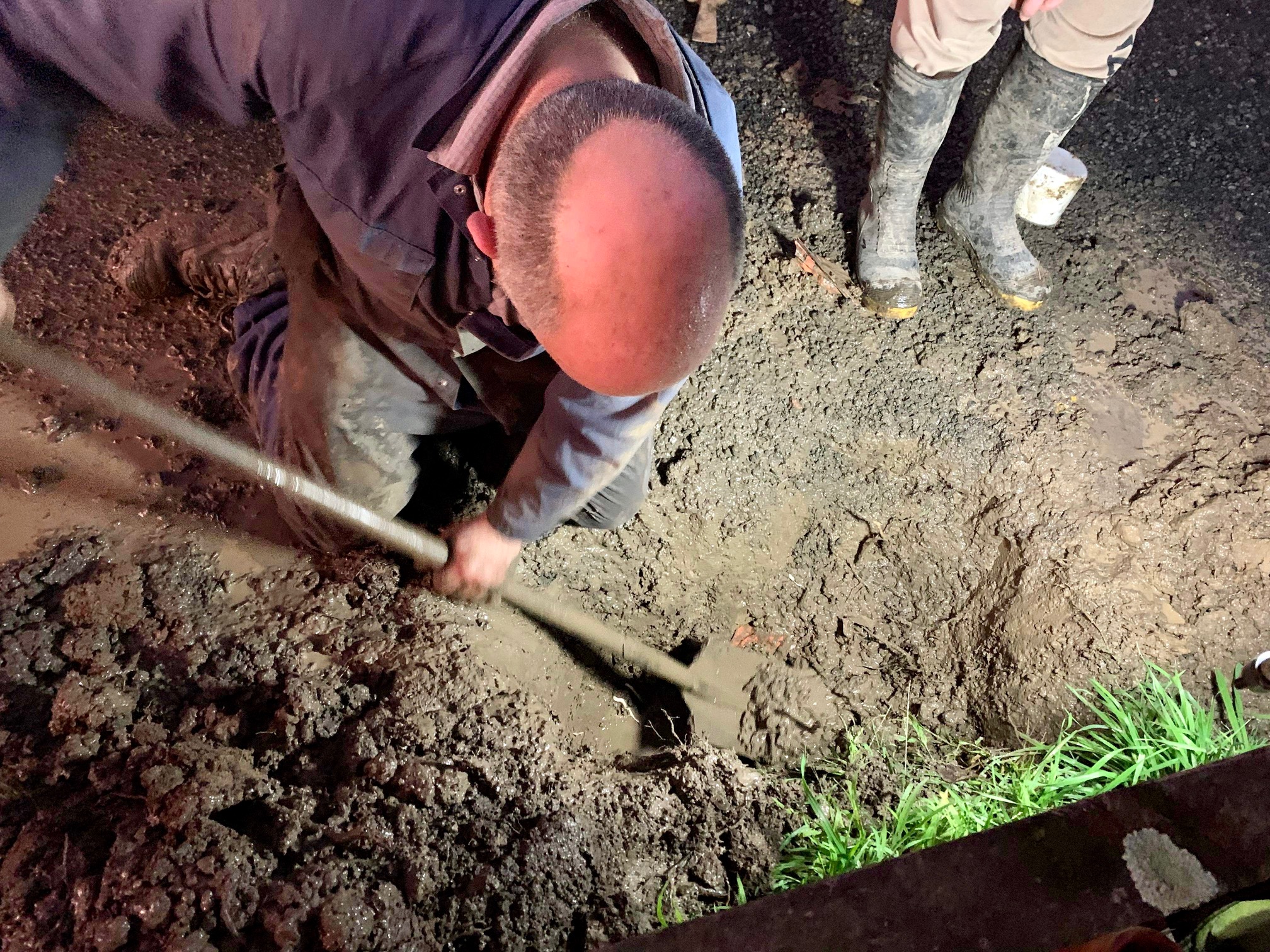 Then there were fierce storms and heavy winds with tree branches down and crashing into fences causing damage, these storms generally end in power outages. Some last a couple hours but unfortunately some last days.  And our electricity connection runs the pump that brings the water to the house. So, picture a freezing winter evening when a windy storm rages outside, click… the power goes out – we are left with no heat, no running water, no hot showers, no flushing toilets and no lights (remember it’s dark in winter by 5 pm).  During an outage, just wind the clocks back a couple centuries and you’re here with us at the Sanctuary! On a positive note, we’re now in the process of getting solar panels installed on the roof along with a battery pack for storage, so in future we’ll be covered for the basics when the power goes out.

Of course the animals don’t mind the power failures not needing lights and hot showers but what has been hard on them is all the MUD. With so much rain this winter, their lush green pastures have become quagmires of mud.  The pigs are quite happy with this, but the cows, sheep, goats, deer and alpacas are having to slush through muddy patches to get to their feed stations.  Thankfully due to kind donations we’ve been able to order several truck loads of crushed rock both this winter and last winter and have built feeding platforms in all the main enclosures so at least the animals aren’t standing in mud when they have their dinner. This is a huge improvement and one we are very grateful to our donors for! 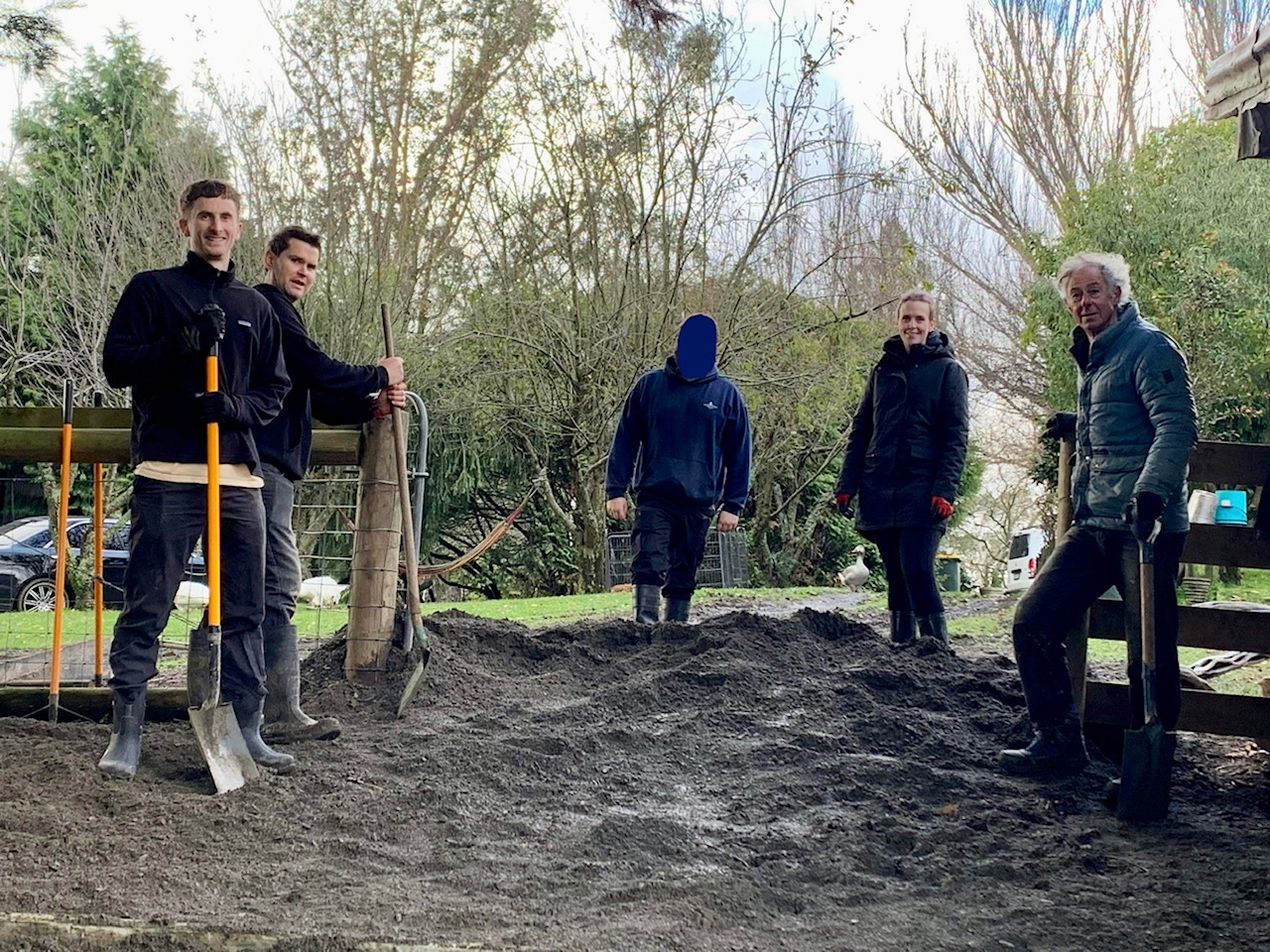 Also we take off our hats in gratitude for other kind donations that have enabled us to build several new shelters this winter!

Mabel and Yowie, our two blind bovines have a new shelter they have both made good use of on the cold and windy nights. And we’ve completed a huge new sheep shelter that will also double as a shearing shed come summer. However, there was a problem we discovered with its placement as the rains kept coming….  it’s filled with puddles!  So we now have to get an excavator to dig a swale.

Pickles, the dashingly handsome rooster who was found in a box on the side of a busy highway now has a brand new shelter for himself and his hens.  We were able to collect pallets free from the back of warehouses and, with our loyal volunteer Philip’s handyman skills, are able to turn them into beautiful homes where the roosters and hens get protection from the wind and rain. And they are safely locked up at night.

above: Philip building the new shelter for Pickles and the hens he watches over

Liberation Sanctuary relies on the generosity of supporters. You can support the sanctuary as a whole, or sponsor an individual by visiting the Our Family page and click +Sponsor on any family member.

With more pallets we also built a lovely ‘castle’ in the deer and goat paddock where the cheeky goats lay in leisure when the sun is out and they gaze at the ducks swimming on the dam. My grandson’s old cubby house has also been relocated near their castle. A coat of paint and new gutters has transformed it into a second shelter that even Kang, our now enormous three year old deer loves to lay in. He does look like a high school kid sitting in a kindergarden chair!

above: Goat Cubby And Castle With Kang The Deer

The feral mother and daughter cats we took in last year have now been joined by another feral female cat who took refuge in our hay barn and an old male cat whisked from the kill list just in time. All four have become good friends and we have enclosed a massive side porch into an inside/outside cattery that they absolutely love. 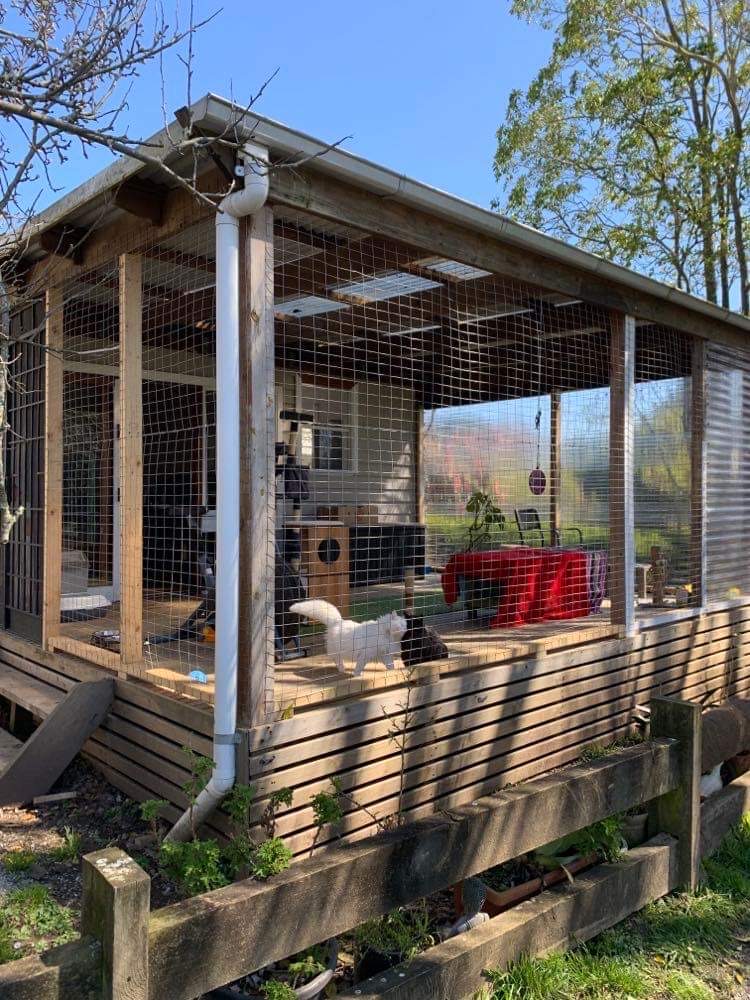 A neighbour had two halves of an old metal water tank he didn’t want. Philip, our handyman joined them together to make a cosy shelter in our special needs pasture where three young calves and four elder ewes roam. 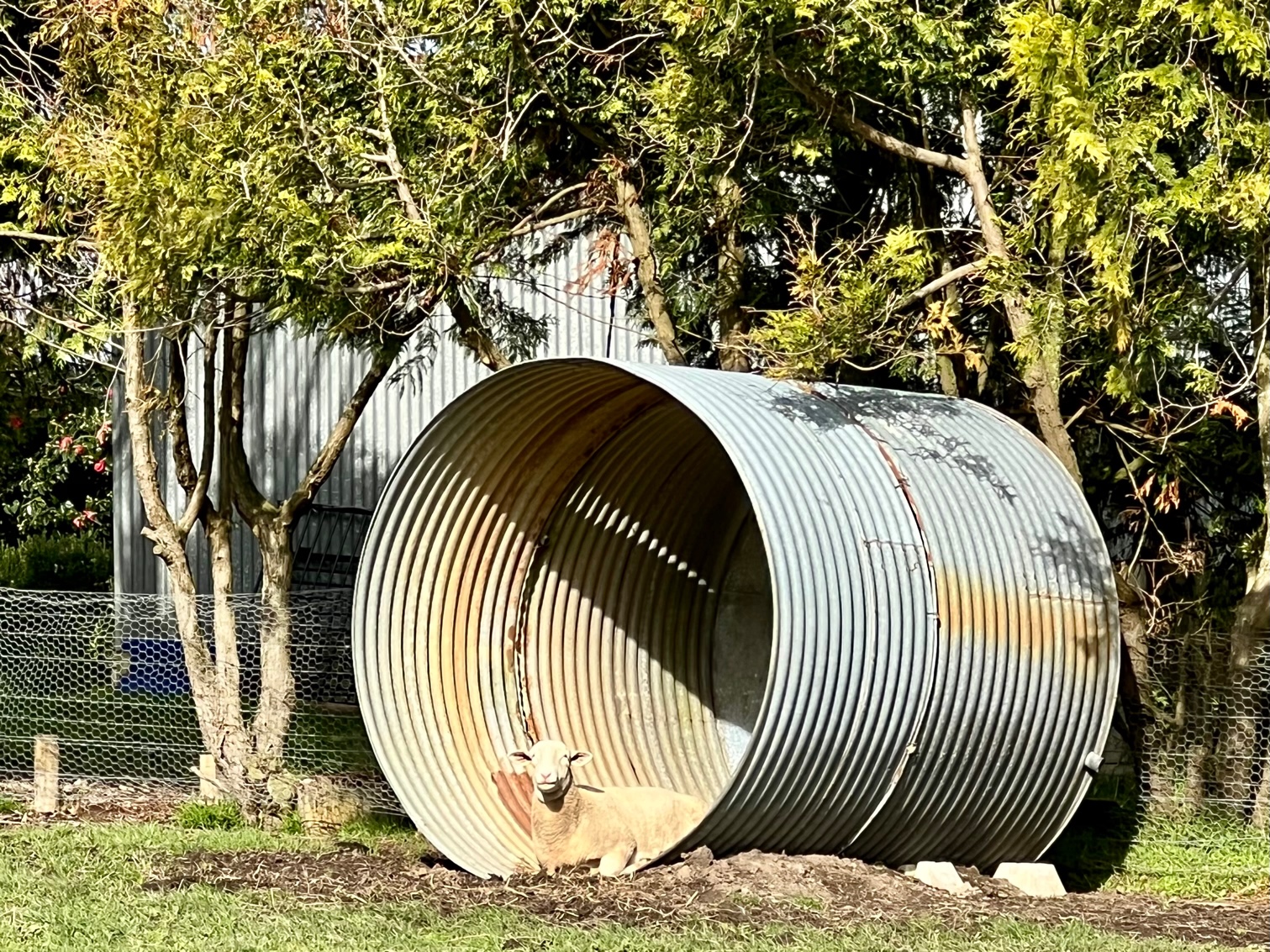 With the rains, and also failing to say no to homing several cows, sheep and pigs who needed sanctuary (the hard part of running a sanctuary that we must learn are the words “sorry we’re full”) we didn’t have enough grass to feed them all. So we had to buy in over 15 large round hay bales plus other hard feeds this winter. Again thank you so much to the supporters who put this food into their mouths!  And we’re so fortunate to also get regular donations of unsold bread and excess veggies/fruit from a few shops in the area. 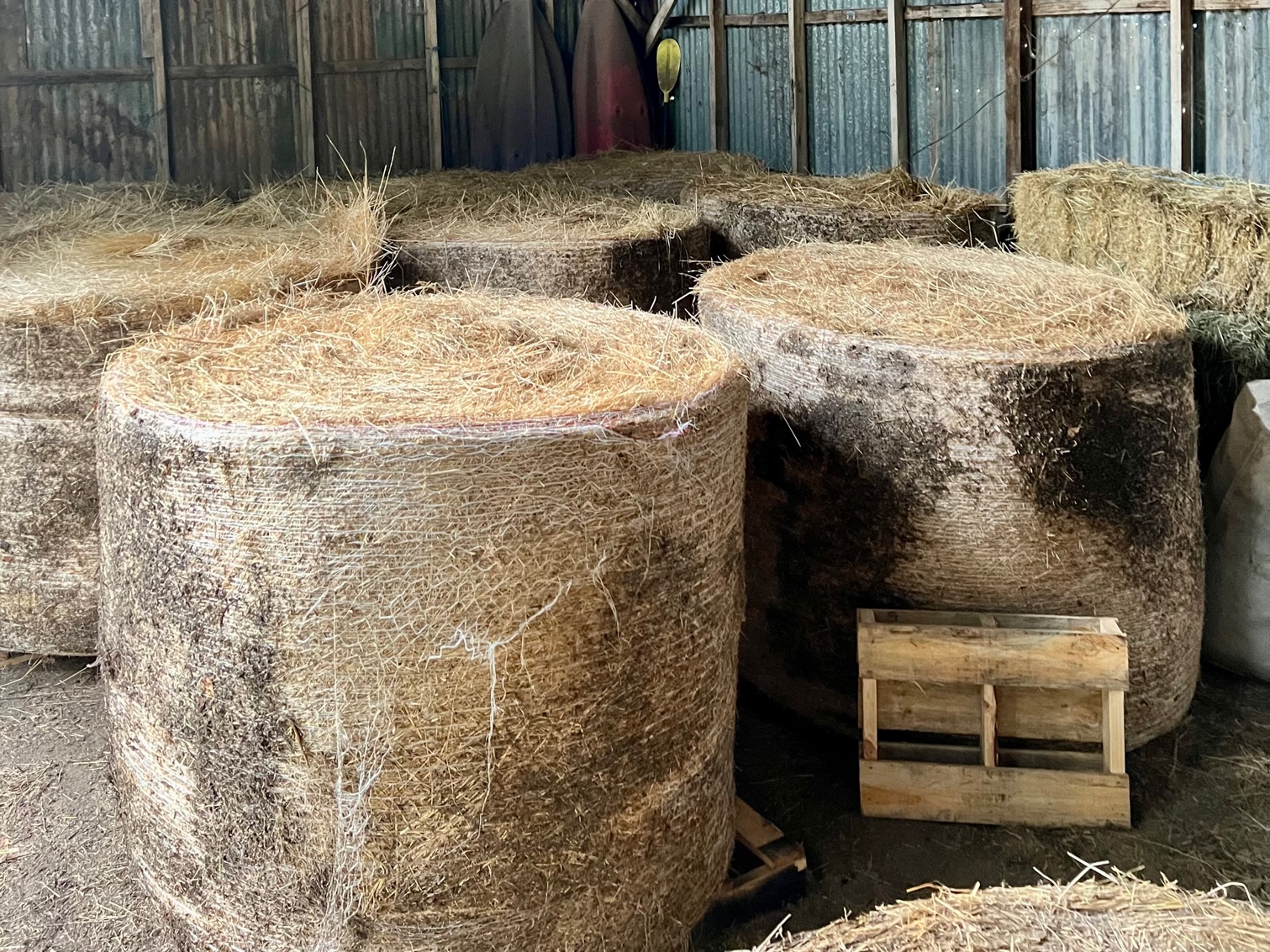 With every season we find we sadly have to say goodbye to some and welcome to others.  This winter we were so sad to lose one of the ducks, a rooster and two hens. Each one is always given a respectful burial where we stand solemnly by their graveside, thankful for knowing and loving them. And we welcomed the two new cats and a foster dog. And with the Spring came an old ewe who was destined to be dog food.  We cook delicious and nutritious vegetarian meals for the dogs who also share the chicken, geese and duck’s eggs with them.

Finally many thanks to our two full time sanctuary hand staff Alex and Danni, our social media part timer Jess, occasional relief workers Skye and Emma and to all our wonderful regular volunteers who have helped out this winter; Philip, Elysa, Sakshi, Siobhan and yours truly.  And to a couple groups of volunteers who came up on two working bees. All this help is so very appreciated! 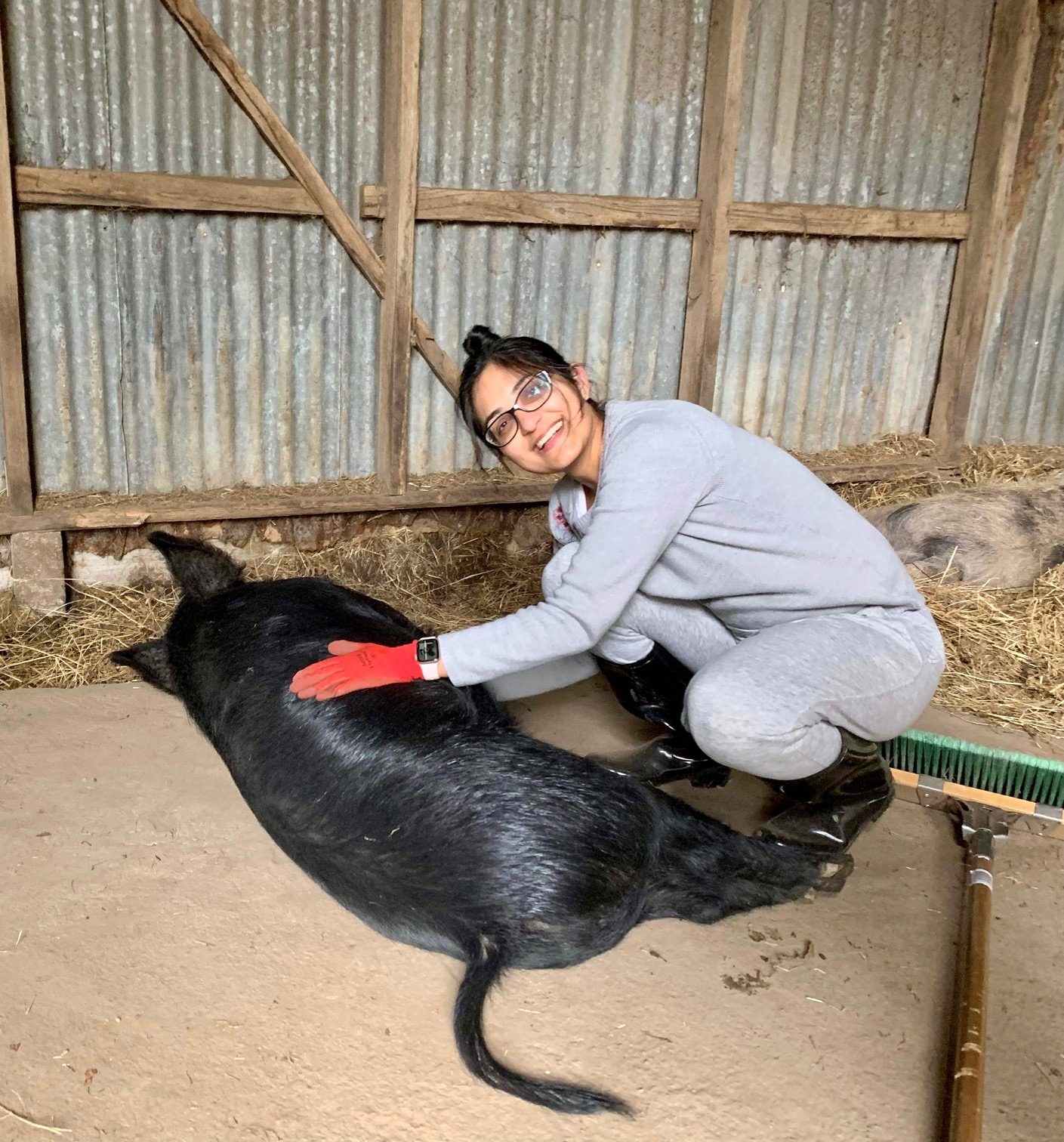 Liberation Sanctuary relies on the generosity of supporters. You can support the sanctuary as a whole, or sponsor an individual by visiting the Our Family page and click +Sponsor on any family member.