Liberation Sanctuary has been taking in rescued farmed animals for over 33 years. We are Australia's longest running dedicated sanctuary for animals freed from the exploitation and slaughter inherent to animal agriculture.

It started back in 1986 when several battery hens (white leghorns were the breed farmed back then) were surrendered to Patty Mark, the founder of Animal Liberation Victoria. Luckily, Patty lived on a large block of land only 10 kilometres from Melbourne’s CBD. The huge garden backed onto the wide and grassy Elwood Canal and was only a few metres from a large suburban golf course, creating a charming rural atmosphere close to the city. Over the next 30 years, the property would become home to hundreds of rescued animals. In 2016, ALV’s urban sanctuary relocated to 45 rolling green acres ninety minutes from Melbourne.

The farmed animals who lived for a period of rehabilitation, or for their entire lives, at the urban sanctuary included laying hens, broiler chicks, roosters, ducks, sheep, pigs, goats, calves, geese, and rabbits. They were also joined by dogs, cats, the occasional possums, fox cubs left in boxes on the doorstep, and even injured birds left in the letterbox. 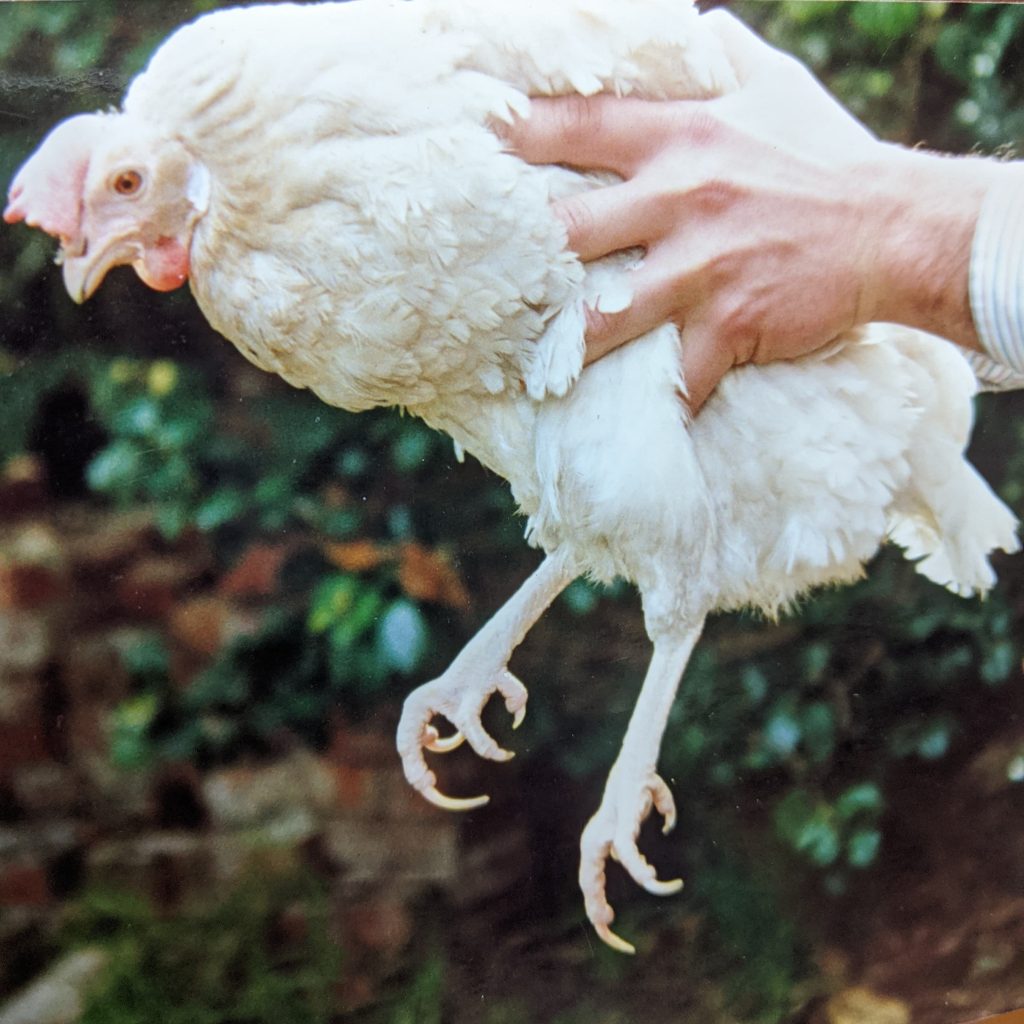 One of the first hens ever brought to Patty in 1986

Industrial animal farming in the 1980s was something people could not imagine, it was shrouded in secrecy and there were very few visuals of battery caged hens. Concerned supporters would buy ‘end of lay’ (18 month old, but already depleted ‘battery hens’ who were suffering feather-loss, fatigue and long overgrown claws) for 50 cents each and take them to Patty to be photographed. These hens were then free to live out the rest of their lives in peace. This is how the first visuals of these abused birds came to light, and were then featured in campaign material that was distributed widely, asking for their freedom.

Sporadic undercover rescues began and Patty would find carriers of featherless hens dropped off at her home with photos of the horrible conditions these birds were found in. In 1993 ALV pioneered the Open Rescue Movement, and since then hundreds of rescued animals passed through Patty’s place receiving veterinary care, nourishing food, loving attention and a place to live out their lives in peace – whether at ALV’s sanctuary or in the loving homes of supporters who generously took in these animals. Those who didn’t survive their tormented industrial lives were all given a respectful burial. Patty always refers to this old property as ‘sacred land’ that holds the spirits of so many dear animals. 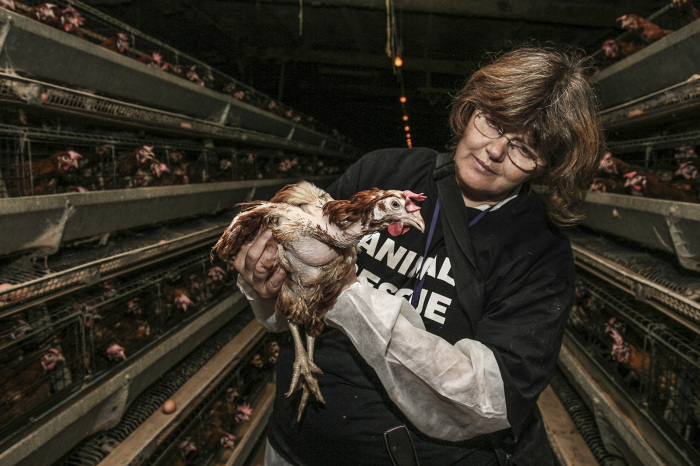 Patty and a battery caged hen.

How can this all happen in an inner suburb you are thinking? Yes, the local Council became involved and visited numerous times. Council gave Patty a special animal permit for her to continue her animal care, so long as she met several conditions including limits to the number of animals on the property and a promise of no roosters or piglets, other than for very short term care and rehabilitation.

Patty remembers in the late noughties, she was relaxing with a cup of tea and the local paper, only to spot a photo of Lulu, a lamb she took in around 2007, leaning against her front fence feeding on an overhanging tree branch with the caption, ”What are EWE doing here?!” The old house ‘with all the animals’ was well known in the suburb, with many people bringing their kids to look over the fence to say hello to whoever happened to be roaming around. As years passed by these children even returned with their kids, saying how much they loved walking by this special place. 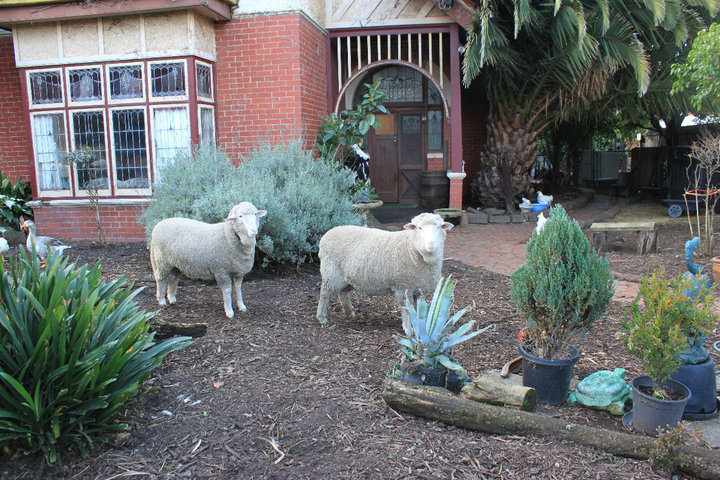 Little Prince and Lulu out the front of the urban sanctuary, almost ten years ago.

Mervyn Langford was a retired veteran and long-standing supporter of ALV who volunteered regularly at ALV’s urban sanctuary. He was like family to Patty and for the last ten years of his life she became his carer. For several years until his death at age 90, Mervyn lived at the urban sanctuary, giving love to all the animals until his last breath. In his will, Mervyn kindly and generously left Patty his unit, and with its sale in late 2015 she was able to secure a mortgage for the wonderful 45 acre rural property that is now home to animals in need taken in by ALV. 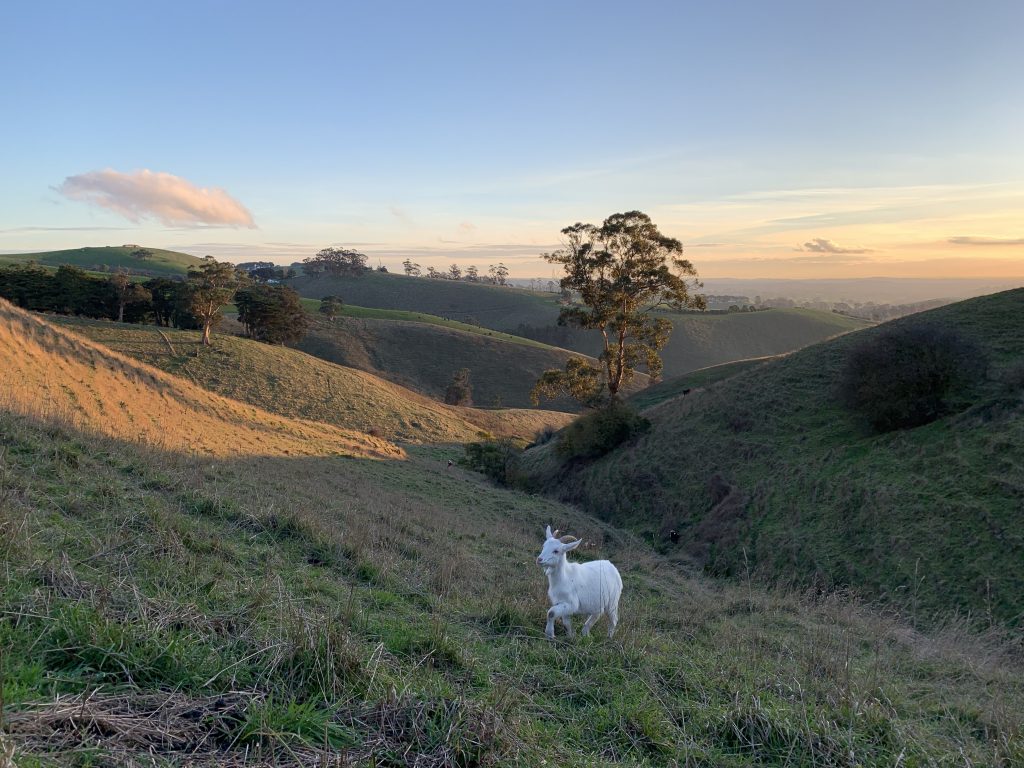 Liberation Sanctuary, a registered non-profit charity, respects the autonomy of each and every animal living here and we strive to give them the meaningful and authentic life they deserve.

We vow to use our animal families’ freedom stories to educate the wider public on the importance of animal liberation and equal respect for all beings.

We are extremely grateful to each and every person who gives or have given this sanctuary home their support, whether morally, physically and/or financially.